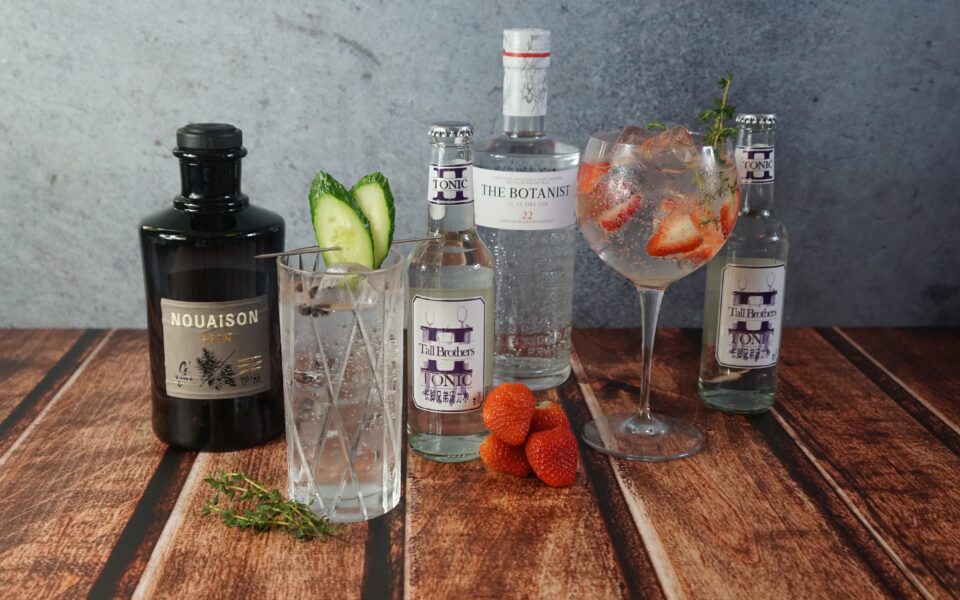 What is a Gin?

In essence, gin is pretty much a flavoured vodka. The only real difference between the two categories is the predominant flavour and aroma of the juniper. In both, you start with a neutral spirit at 96% alcohol by volume (ABV) that has been derived from an agricultural source like grain. With the gin, you then rectify or compound this spirit with a series of flavours (botanicals), in such a way that the predominant flavour present is the juniper. Gin must, by law, then be bottled at a minimum ABV of 37.5%.

(b) The minimum alcoholic strength by volume of gin shall be 37,5 %.

(i) a juniper-flavoured spirit drink produced exclusively by redistilling organoleptically suitable ethyl alcohol of agricultural origin of an appropriate quality with an initial alcoholic strength of at least 96 % vol. in stills traditionally used for gin, in the presence of juniper berries (Juniperus communis L.) and of other natural botanicals provided that the juniper taste is predominant, or

(ii) the mixture of the product of such distillation and ethyl alcohol of agricultural origin with the same composition, purity and alcoholic strength; natural and/or nature-identical flavouring substances and/or flavouring preparations as specified in category 20(c) may also be used to flavour distilled gin.

(b) The minimum alcoholic strength by volume of distilled gin shall be 37,5 %.

(c) Gin obtained simply by adding essences or flavourings to ethyl alcohol of agricultural origin is not distilled gin.

(a) London gin is a type of distilled gin:

(i) obtained exclusively from ethyl alcohol of agricultural origin, with a maximum methanol content of 5 grams per hectolitre of 100 % vol. alcohol, whose flavour is introduced exclusively through the re- distillation in traditional stills of ethyl alcohol in the presence of all the natural plant materials used,

(ii) the resultant distillate of which contains at least 70 % alcohol by vol.,

(iii) where any further ethyl alcohol of agricultural origin is added it must be consistent with the characteristics listed in Annex I(1), but with a maximum methanol content of 5 grams per hectolitre of 100 % vol. alcohol,

(iv) which does not contain added sweetening exceeding 0,1 gram of sugars per litre of the final product nor colorants,

(v) which does not contain any other added ingredients other than water.

(b) The minimum alcoholic strength by volume of London gin shall be 37,5 %.

(c) The term London gin may be supplemented by the term ‘dry’.

Gin has a huge amount of very interesting history surrounding its development and climb to such a widely consumed and loved spirit. Gin originates from the Dutch spirit ‘genever’, which literally translates as ‘juniper’. This was a distilled malt wine that had been flavoured with juniper, amongst other herbs and spices. First references of the spirit date back to the 13th Century, with the first major contact for the British with genever being during the 80-year war. British troops fought alongside the Dutch, who were all drinking genever before battle, thus giving rise to the term ‘Dutch Courage’!

Although ‘gin’ is said to have been invented around 1650 by Dr Franciscus Sylvius in the Netherlands, this still would have been classed as genever, and not gin as we know it. The date that genever was re-written and gin came to be is a little hazy, but the first written reference of the actual word ‘gin’ was in 1714 in ‘The Fable of the Bees’, by Bernard Mandeville. In the book, it appears that the ‘Gin Shops’ were already rife, and that gin had become a part of the fabric of culture at the time. During the 18th Century, the Brits were consuming so much gin that it had led to widespread abuse and hardship, which William Hogarth condemned in his infamous ‘Gin Lane’ etching above, and resulted in the 1751 Gin Act which aimed to curb the nation’s consumption.

Over two hundred years later, gin has now become incredibly popular, and this is in part thanks to the humble G&T. The origins of this drink date back to around 1870 when British troops were stationed in India. The quinine in tonic water was derived from the bark of the cinchona tree and was believed to have anti-malarial properties. The tonic was extremely bitter and rather foul-tasting, so sugar was added to sweeten it and gin was added to make it more palatable. The citrus addition followed further down the line, but the G&T was here to stay!